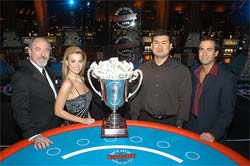 The movie 21 was based on the true history of MIT students but there are some basic changes in the movie that did not happen at all. The movie was said to be based on the 1st MIT team but the truth is there was another team what started 12 years earlier than the popular team. That team was started in the 1979 by the lecturer named J.P Massar and that was the starting of the famous MIT tale in the blackjack history of the gambling world.

J.P Massar gave a lecture on the topic named "How to Gamble if You Must" in MIT and that lecture contained the usefulness of card counting theory in blackjack and after the lecture he formed a team and they started gambling in the Atlantic City casinos but in first few days they did not gain anything from their experience. They were unsuccessful for every of their chances and they could not understand where the problem really was.

In 1980, J.P Massar met with Bill Kaplan who was also running a team of blackjack team that time and his team was really successful for last 3 years and now the members of his team were visiting separately in Europe to check their skills about the game, then Massar told him to take a visit of his team in Atlantic City and made some corrections in their strategies to make them succesful. When he came to visit, Kaplan found that each member of Massar team was using different card counting method that was the fundamental mistake for Massar team.

Then, Kaplan told them to change their basic strategy, they had to learn a new and effective card counting strategy and betting system and they also had to take great training and they also had to know about the casinos playing systems for some months. After getting a really hard preparation, in the late 1980, they started their mission with $89000 and a team of 10 players including Kaplan Massar. Within 10 weeks the team able to twice their invested amount and they could provide 250% profits to their investor.

This team was the first MIT team and this team showed the path for the later team and the latest team of MIT earned over million in the 90s of the earlier century and they changed the history of blackjack and also gambling sector.